Similar to relational database tables, a StarRocks table consists of rows and columns. Each row of data corresponds to one record, and data in each column share the same data type. All data rows have the same number of columns, and columns can be added or deleted dynamically. In StarRocks, there are two types of columns -- key columns and value columns. The key columns are used for grouping and sorting, and value columns can be aggregated by SUM, COUNT, MIN, MAX, REPLACE, HLL_UNION, BITMAP_UNION, etc. Therefore, a StarRocks table can also be considered as a mapping of multidimensional keys to multidimensional metrics.

In StarRocks, data is stored in table columns. Physically, a column of data is chunked, encoded, and compressed, ending up being persisted on non-volatile storage. Logically, a column of data can be viewed as a vector of elements of the same type. All columns of a row of data remain aligned in their respective column vectors, i.e., they have the same vector subscript which is called the ordinal number or row number. The ordinal number is implicit and does not need to be stored. All rows in the table are sorted multiple times by key columns, and the sorted position is the row number of that row.

When performing range search, how to quickly find the beginning and end of the target row? The answer is shortkey indexing (aka sparse indexing) as shown below. 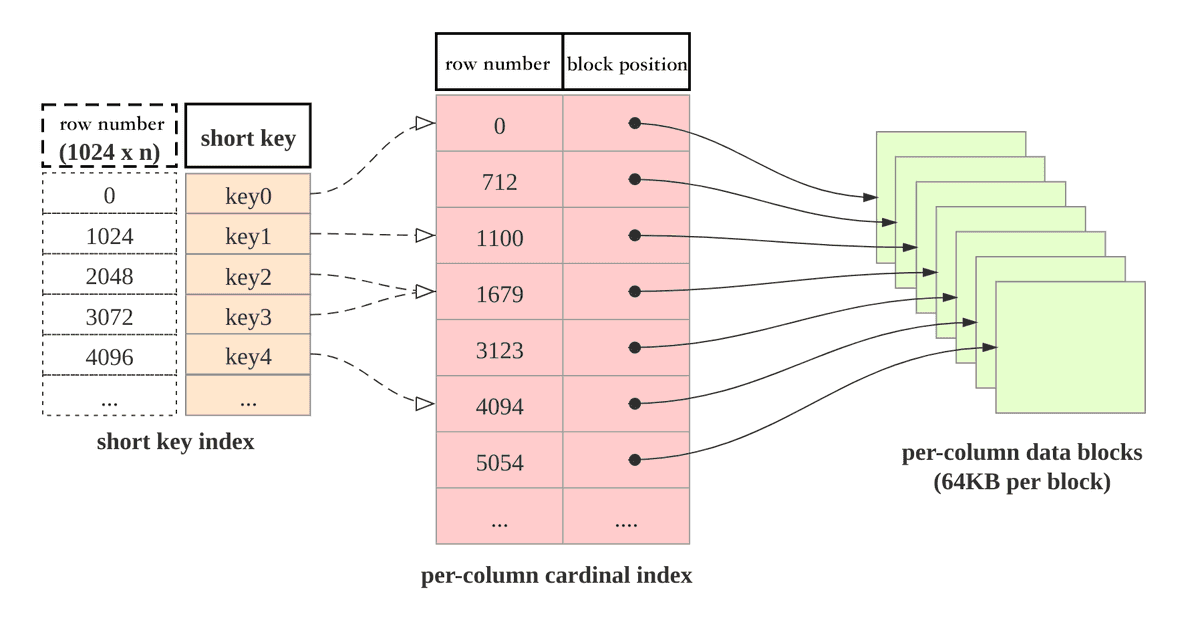 Thus, the process to find the prefix of the key column is as follows: First, look up the shortkey index, and get the starting row number of the logical block; Second, look up the per-column cardinal index, and get the data block of the target column; Third, read the data block, that is, to decompress and decode it to get the data item corresponding to the prefix of the key column.

For more details on table design, see the following sections.

Edit
Feedback
In this article